Your complete Guide To Outsourcing, Developing and Publishing an Indie Game

Everything you need to know about outsourcing, developing and publishing your indie game. How much should you budget, and what do you need to consider? Keep reading to find out.

So, you want to make a game.

In the outsourcing sector, you get a lot of flippant requests (think, “I want to make a super realistic, AAA quality game that will become the next Last of Us. My budget is $200.”). Happily, this is the minority - but, among many other misconceptions, we at CGHero, and no doubt other games studios, hear requests to this tune all the time.

However, for as many unfeasible budgets and messages we get, there are countless passionate aspiring game developers out there with great ideas for their prospective game, and simply need a push in the right direction to properly scope and budget.

Some food for thought

The indie games development scene is a vibrant, bustling hub for budding talent and growth; the sheer diversity and creativity to be found here is nearly unparalleled, a result of people creating and publishing games simply to share the pure joy of playing a game. You’ll likely find the indie scene to be filled with passionate people from across the globe, operating largely online, namely Twitter, Reddit and Discord. Moreso, this fantastic community has gathered realms of free resources to help fellow devs on their journey. You can check out our article on the best free resources for developers here.

If you want to create a game from scratch, this is likely where you’ll be starting.

No Man is an Island

The first thing you need to consider - is this a hobby, or is this your full time job?

Are you a student, looking to fully publish your first ever game, or do you work a boring full-time job and want to reconnect with your true passion? Without grants, funding and publishers, you may struggle to personally finance the team required to ship a full game - even with an average five person crew, you’re looking at a yearly cost of $150,000.

On the other hand, if you want to deep dive into this, solo game development is immensely rewarding, and very possible. Some of the most critically acclaimed games out there, including Minecraft and Stardew Valley, were made completely from scratch by a one-man team.

Alternatively, work with a group of friends and distribute the game and split the cash once (if?) your project becomes profitable. Either way, making a game can be seriously fun and rewarding.

Before you jump into making a game, consider the complexity to cost ratio; the more visually and mechanically realistic a game is, the more expensive it will be.

When you think of an indie game, Call of Duty and The Last of Us don’t spring to mind. The key difference between AAA and indie is cost and complexity. Large, multimillion dollar-backed studios can afford to develop these massive multiplayer or lengthy narrative games with ease. On the other hand, indie games, due to the small teams and limited budgets, are created around a few core mechanics, and rely on stylised visuals to keep production costs low. For this reason, the majority of leading indie games are highly stylised, such as Narita Boy, Hotline Miami and Among Us. Using a distinctive art style for your game is an effective means of delivering brilliant visuals without compromising quality or incurring highly technical, expensive artwork. So, before you create your game, devise a few strong core mechanics and a strong style bible to keep costs low and ensure a quality end result. 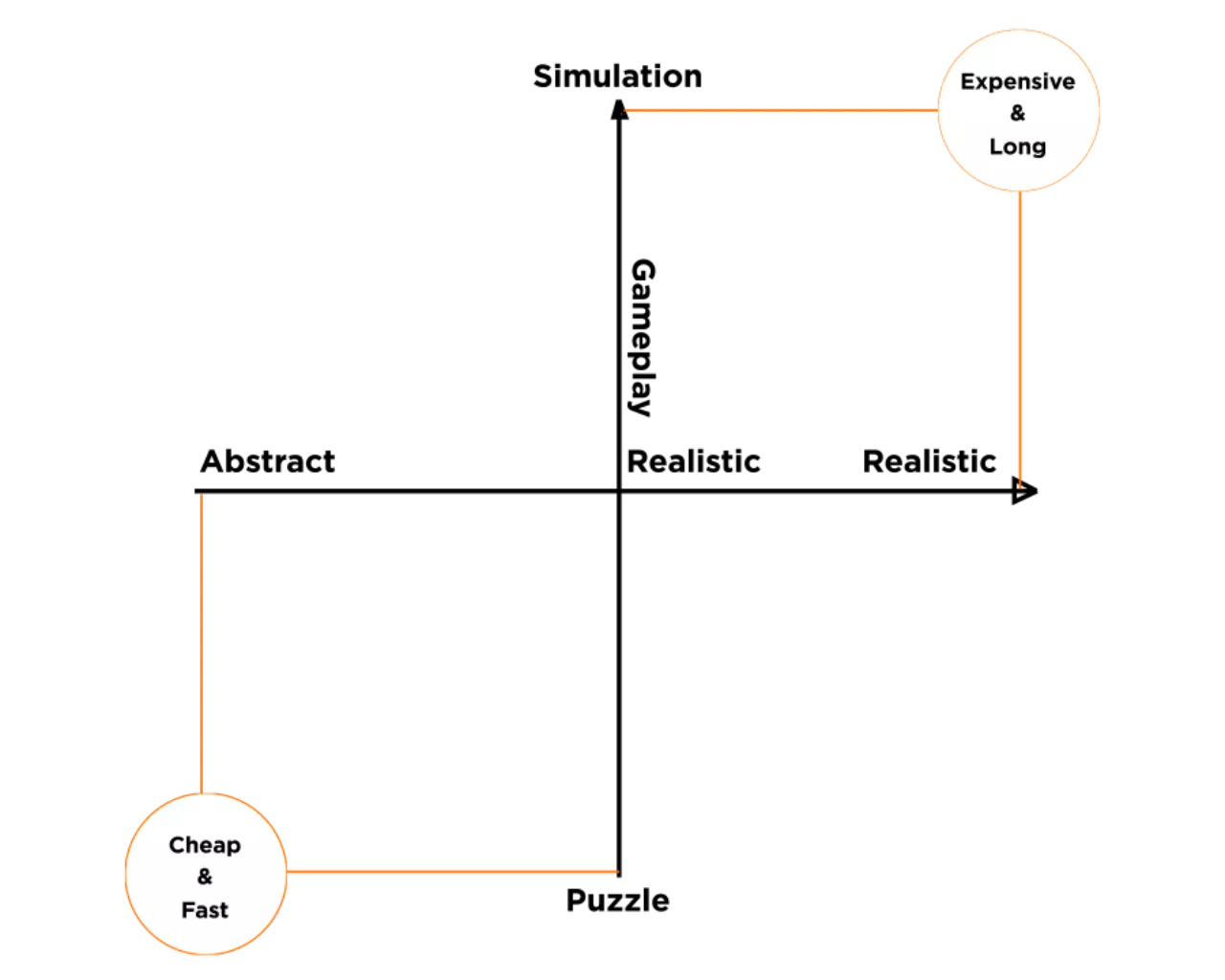 You can trim down a significant amount on these costs by hiring an artist to create a modular kit over a few weeks or months, and then implement these assets into your game yourself. Likewise, working with a game designer to create a few core mechanics can help you get the ball rolling.

However, you also need to consider:

You can check out our full guide on CGI freelancing costs here.

Depending on you or your friends’ expertise, the scope of your game and how long you spend on development, the full cost of producing a indie game from scratch with a salaried/paid team will generally resemble figures from $50,000 to $250,000, however this can theoretically climb to $750,000 depending on publisher involvement (more on this later!). That’s a huge window - we know! However, keep in mind if this is a short game jam or a fully fledged operation between you and your team. For this reason, many indie games are created as a fun team project between friends alongside work.

Generally speaking, indie games are distributed for a low cost, generally through platforms like itch.io, or game jam sites. As they enter various stages of development, you can scope accordingly based on the platform you want to publish your game on.

For example, Steam charges $100 to publish a game, and then takes 30% of all profits generated through the platform. However, this also comes with access to Steamworks. This allows your game to integrate a number of features, including achievements, leader boards and dedicated servers if you want to host an online game. Although subtle, these add a level of polish and immersion to your project. Steam is also a famously stable, safe platform, with a basically unlimited ceiling for exposure and success. In addition, the $100 publication fee is refunded once a game passes $1000 in profit.

So, unless you’re sitting on $250,000, you might find these costs a bit unattainable. However, there is a solution.

In exchange for funding the development of your game and a percentage of profits, a large publisher will purchase the rights to your game and help polish the final result with their own resources. This can include UI/UX design, QA and usability testing. In addition, they will handle the most invaluable of all - marketing and distribution.

Although by all means not unheard of, games in the current climate will generally generate far more revenue when supported by a large publisher - in the UK, games such as the Overcooked franchise and Blasphemous have seen tremendous success after being published by video game developer Team17.

The critically acclaimed Portal was taken on by Gabe Newell himself after he played a short game created by a team of students at a graduate fair. At conception, only the portal gun mechanic had been implemented - Valve hired the cohort who had worked on the virtual slice to exclusively work on developing the game, and within 2 years Portal was released. Consider routes to publication such as this when developing your game.

However, this doesn’t come without a non-fiscal cost. You can expect less control over your game in the form of looming deadlines and less creative freedom. You may find your game vision changing significantly as you work with external publishers, for better or for worse.

That said, each publisher has their own terms and conditions - many prioritise organic, creative development over just profit and so will allow a team to work largely independently. Others will specifically help with marketing or distribution for a smaller cost, allowing you to focus more on development, whereas others will be more involved and will expect a far more interactive relationship. In any case, when it comes to development, actually creating the game is only a small piece of the puzzle, and working with an external party can help relieve a lot of these extra responsibilities. As such, before pitching yourself to publishers and studios, shop around and find one that works for you.

One route to publication is to produce a demo, also known as vertical slice, and showcase this at expos, conventions and the like. Prospective publishers will look attend events like these for promise in a game early on, and so may hire a team of developers (much like Valve) or will commission a full game from the team, whilst being supported financially by the publisher. This is much lower risk, and also allows you and your team to work with large publishers first hand, thus building your experience.

Several independent studios have built their success around creating and publishing their own games without the need for a AAA production studio - Supergiant Games, creators of the brilliant Hades and Pyre, was founded by two EA Games employees who each quit their job, moved in together, and began working on a game from their savings. With some occasional outsourcing, they released Bastion in 2011 to widespread critical acclaim. Although this first release was distributed by a publisher following a presentation at an expo, however all subsequent games were developed completely in-house.

So, whilst it is totally feasible to see your game from start to finish, consider working with a publisher for at least your first release - this could help finance your studio and future games.

Steam and itch.io are fantastic sites for indie developers who are interested in self-publishing their games, the latter being completely free to use. Once you get your game out in the wild, the feedback, experience and exposure will be invaluable to your career, regardless of publisher involvement.

Some of the best indie games out there are free-to-play, including Brawlhalla and Doki Doki Literature Club, and even more operate on a pay-as-you-feel model - itch.io and Humble Bumble are especially notable for this. Steam and Epic Games operate on a premium model, meaning published games must be in a highly polished state prior to distribution. Prices throughout the year rise and fall, with profits peaking in bi-annual sale seasons.

By publishing your game on Steam, your game can easily climb best-selling charts and rankings without much input from yourself, by simply adjusting the price of the game throughout the year to coincide with Summer and Winter sales. This is a super effective means of marketing your product without much interaction, as players generally look for fun games to spend some time on between projects. In addition, Steam’s multiplayer support and fantastic development resources make it an easy means of attracting customers and a fanbase for your project.

In any case, indie games generally retail from as little as $2, up to $40, depending on the length of the game and the coinciding development costs. Anything more than this, and you risk pricing yourself out of the indie-game consumer’s wallet to be on-par with AAA prices, therefore raising unrealistic expectations. For example, No Man’s Sky attracted significant controversy when it launched with a retail price of $60, despite limited gameplay and debilitating bugs. At the end of the day, regardless of passion and creativity, creating and publishing a game with the intent of making a living is a business plan, and comes with often strenuous commitments. Consider reaching out to publishers for your first release - this will allow you to spend more time on the actual development, rather than concentrating on time-consuming areas that may not be as important to you (advertising, QA testing, payroll, business plans, presentations to investors, ect). In addition, this can finance future projects and allow you to set up your studio, as well as providing you with realms of publishing experience.

Outsourcing elements of your game can relieve significant pressure and may help you realise your vision far more effectively, and often to a much higher standard. Consider this as an option if you aren’t interested in working with a publisher. Hundreds of amazingly talented freelancers are available on CGHero to work with you on your project from today - reach out and get in touch to see what we can do to help you with your project.